For a number of years now I’ve been taking care of the feral cats around the neighborhood and by using lots of food and patience, I had a few tamed, some still wild and a few in between. Most of them would come close to me only when I brought their food. Besides feeding them, I was also trying to care for a few that were sick and get the more docile ones to the vet to be spayed, neutered and vaccinated. Adele is one of them.

It’s dinner time now and as usual most of them are gathered in front of my house, across the street and down the hill waiting for dinner. I fixed their food and went out to serve them, that’s how most cats would look at it. They tore into the food as if they hadn’t eaten in days although this was their second meal today. All of the bunch hadn’t arrived yet so I whistled loudly a few times to let them know dinner was served.

From across the street I could see MiniCat, her three babies that were now about three months old, running as fast as they can with babies trailing behind Mama. The kitten at the end of the line seemed to be confused and wasn’t following exactly as it should behind the rest of them. Mama and two of the little ones stopped at the food and began eating but this one kept running right past them towards me and didn’t see me standing in it’s path. It was a fuzzy little blue/gray ball of fur I called Sweetie because she was so good natured, adorable and a real beauty. 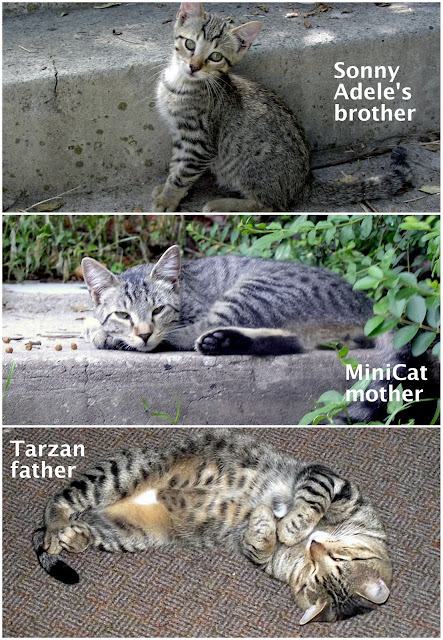 As she ran past I scooped her up in my hand and immediately saw the problem. Her eyes were completely glued shut from the dried mucus secreted from them and so badly she was unable to see. To get from the wooded area across the street where this family lived, she was only able to followed the other cats by using her keen cat senses. I had been treating the kittens for what was probably a herpes virus infection causing their eye problems and hoping it wouldn’t turn into something more serious like respiratory infections. The anti-biotics I was putting in their food and the medicated drops I put in their eyes when I could was getting them well but they still needed a few more doses of medicine. MiniCat was still a little wild but she had been around a couple of years and trusted me enough to bring the babies up close and would let me handle the kittens when I could catch them. They learned quickly not to bite the hand that feeds them. This part doesn’t always go too well with feral cats.

I carried Sweetie into the house where I gently washed her eyes to get the lids open and applied the eye drops. She didn’t resist at all, I think she actually understood that I was trying to help her. She had not eaten yet so I fixed her a big bowl of food which she gobbled up quickly so now she is full and so content she is purring out loud as hard as she can go. She is a happy little kitty.

I took her to another room to relax a while and to decide what to do with her next. There was no doubt that I would keep her for a few days to be sure she was completely well or get her to the vet if necessary before returning her to her family. I sat down in a chair and placed Sweetie in my lap hoping she would take a nap but she is still purring loudly and prancing around all over my lap. She stopped a minute and looked up at me with her shinny little eyes and began to climb up my body towards my face. I let her go just to see what she was going to do. Sweetie climbed right up my shirt, in my face still purring loudly and began to rub her head against the sides of my chin then all over my face. She continued doing this until I had enough and stopped her; she is still purring loudly. I knew that the rubbing her head against my face was a sign of affection in her cat language and I understood exactly what this little creature was trying to tell me.

Sweetie, in the only way she knew how, was expressing her affection towards me, her appreciation for all I had done for her and that I was now her friend. I do believe some animals, cats especially, understand what love is and will express it to people they care for. I had just created a bond between cat and human that would go along way towards moving her from the feral cat stage to a tame domestic cat that would have a good home with someone to care for her. This little creature had the intelligence and was thoughtful enough to show her affection for me and how grateful she was for the help. I was amazed at her response and have never seen this much affection displayed in a cat so young. Most people, those who know nothing about cats, would consider her nothing more than just a dumb animal, yet here she was demonstrating how thoughful, caring and intelligent she really is. I knew Sweetie was going to be one of those special pets that rarely comes along.

At that time I had about ten feral cats that had followed me home and claimed me as their owner and about twenty more living wild that I was feeding, caring for, running up large vet bills for and trying to get tamed enough so that maybe I could find a home for some of them. I had actually worked this cat feeding project into a full blown shelter for cats that I call the Critter Farm. This was many more cats than I could really support but I was somehow getting the job done and no one else was going to do it. Sweetie was going to have a good home if that meant I was to kept her. After all it’s just one more little mouth to feed?

Over the next few days I cared for Sweetie while searching to find a good home for her. In the past I had not been very lucky at finding homes for feral cats as not many people will take the time and have the patience needed to care for a partly wild cat even though it would be mostly tame and used to being around people before I would let someone have it. I called Renate, a friend, who had taken one of my feral cats, Margo, a couple of years earlier and had done very well caring for her. Margo had turned her into a cat lover so I knew Sweetie would be loved and taken care of very well. She agreed to take Sweetie so I delivered her with the medicines to her new home. It was instant love between human and cat from the time they first met.

Sweetie now has a name, Adele. It fits her very well and she is now grown, a beautiful cat and is doing great. She has a good home, a loving owner and is one of those sweet, loving, good natured cats that bonds with people very well. This relationship has been good for Adele and for her owner. She is no longer a feral cat and is doing a very good job of training her owner as to how she would like to be cared for; and that’s just the way it goes with cats.