Domestic cat symbolism. This cat with diamond blue eyes is made to be a symbol. Image in the public domain.

For all symbolism the true meaning is personal.

Cat symbolism is related to psychic power and also creativity and superstition, I’d say. The cat is mysterious to many people. However, the cat is not mysterious to me and many other people. Perhaps cat animal symbolism is outdated in parts of the developed world because although thousands of years ago the cat was mysterious, today it is not for an increasing number of people. However, in many countries and continents such as Africa, South American, and parts of China it is quite different. 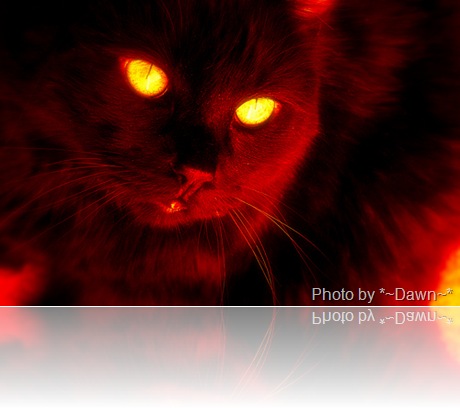 Most people will associate the black domestic cat with witchcraft, magic and occultism. The connection may apply to any cat doing something that people interpret as witchcraft. That may be the extent of general knowledge about animal symbolism in relation to the domestic cat. We know about witches familiars. This is connecting darkness with evil and the unknown and then combining it with the cat which at one time and to some people is still mysterious and unknown.

In Celtic lore the black cat was evil and sacrificed. Some people still associate the black cat with evil and the devil. But in recent history and today the black cat symbolises different things to different people. It just depends where you are. The black cat can bring good or bad luck. It normally symbolises luck of some sort perhaps indicating the human’s insecurity and desire for certainties.

The domestic cat today serves as a symbol (a totem) of independence. The cat reminds us that we should be confident in ourselves and be true to ourselves with independent thought. This is my interpretation.

The domestic cat symbolises the need to take care of ourselves and at times to pamper ourselves. This is the impression that we get from the domestic cat.

We know how curious the cat is. That cat symbolises an enquiring mind and the desire to explore to find the best option.

We also know how we can’t force a cat to do what we want them to do. The cat knows how to say No. The domestic cat is a symbol of how to be assertive.

The domestic cat also symbolises mythical and magical powers because of its ability to escape death. They are famous for having nine lives. In truth this is down to the cat’s super senses and athleticism.

The symbolism of kittens is innocence and cuteness. There is a place in the world for cuteness as it is an expression of charming innocence. Innocence is purity and purity is precious in an impure, corrupted world. We seek the beautiful purity of innocence 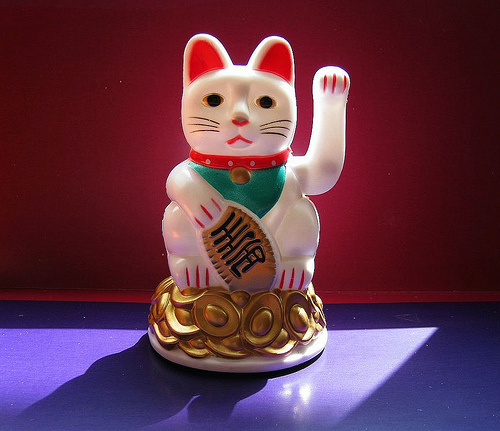 The beckoning cats of Japan are well known – The Maneki Neko (meaning “Beckoning Cat“). They are outside shops etc. to bring luck to the business. The cat in this instance symbolises luck. You can buy them in a hardware store local to me in S.W. London! They are on the top shelf amongst the door knobs and tools 😉

Cat represents guardian of the underworld

According to ancient mythology cats are the protectors of the gates to the underworld. If you believe that it may be a calming influence on you if you are frightened of ghosts or evil spirits. But I have also read that the Ancient Egyptians believed that Tutankhamen would be led to the underworld by a black cat.

In ancient Rome the domestic cat was considered to be a guardian of homes. Is this an extension of the goddess Bastet’s role as protector?

Legend has it that Freya the Norse goddess of love and fertility was pulled in a chariot by two black (or blue) cats. Freya was a warrior goddess and the goddess of sensual love. So, cats are associated here with warrior prowess and warmth and affection.

We know that the Prophet Mohammed loved cats and was the caretaker of cats. Legend states that Mohammed loved cats because a cat saved him from being bitten by a snake that was in his sleeve. The snake refused to leave. When the snake appeared, the cat pounced and carried it away. This legend leads to another that the M tabby mark on the forehead of the tabby cat represents Mohammed. There are other legends regarding the tabby M!

Bastet was a a lioness-goddess initially and then a cat-goddess (cat head, human body). She symbolised protectiveness. She was the protector of the home and women’s secrets and also a guardian against disease and evil spirits. She was originally seen as “protector goddess of Lower Egypt”. This seems to square up with other instances where the cat represented protection and guardianship.

I am not sure of the Egyptian Sphinx should be included in this discussion but it is a mythical creature, half lion (head) and human (body). It guards the temples. This seems to be in line with the general symbolisation of the cat as a guardian because of her abilities.

First I’ll say that cats can be on tarot cards because there are different decks of tarot cards, which are a mystical way of learning about ourselves and our future.

The Queens of Wands symbolises extroversion, boldness, energy, creativeness, stubbornness and courage.  The card shows the queen siting on a throne decorated with lions facing in opposite directions. The wand in her right hand is beginning to blossom into life. She represents warmth and fidelity.

There is a black cat at her feet. We know the black cat is linked to magic and the occult. The black domestic cat symbolises her independence and interest in the occult and magic.

Below are some more pages on animal symbolism.

Why are some Australian schoolgirls identifying as cats?

In late January of this year, I wrote about a school in America that was accused of installing cat litter ...
Read More

Good or bad idea: Beat up on a black cat pinata for Halloween entertainment

Is this a good or bad idea? I thought I'd seen arguments about everything imaginable on Facebook when I came ...
Read More

I've been dreaming of cats. I'm not sure about cat dream meaning. I did some research, and was a little ...
Read More

The jaguar, and perhaps more importantly the black jaguar (black panther), was seen as other-worldly and envied (I guess) by ...
Read More