In North America some people search for bobcat kittens to adopt and treat as domestic cat companions. This page is about bobcat kittens in the wild, from conception to independence.

Sadly, a lot of the studies about bobcat reproduction comes from the study of dead bobcats! Yes, sounds horrible but true. These are females that died in traps. Traps set by people in the fur trade. It is still considered acceptable to “harvest” bobcats. Sorry to go on but the word “harvest” is horrible too. 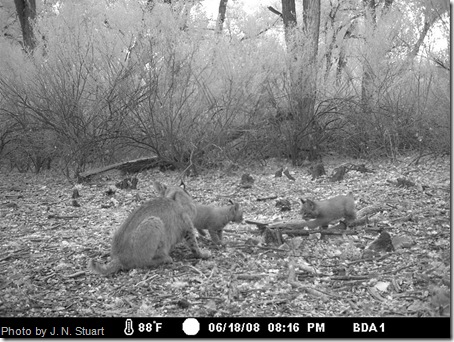 Bobcat kittens with mother – Photo by J. N. Stuart. The picture above is by a camera trap, taken in Bosque del Apache NWR. The project team was Matt Farley, Jennifer Miyashiro, and J.N. Stuart. I like the picture for the fact that it is natural and real. It shows mother with two kittens, as far as I can tell.

Bobcats are polyestrous (they have several oestrous cycles during a single breeding season). Studies on killed bobcats indicated that females go through three oestrous cycles in a season. They are, it is thought, spontaneous ovulators.

Pregnancy rates depend in part upon the age of the female, the prey density (the amount of food that is available) and the bobcat density. 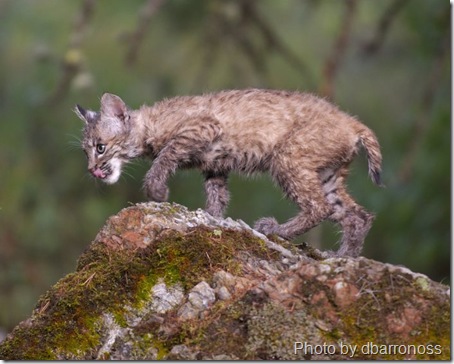 Between courting there was little interaction between males and females as observed in captivity. However, female bobcats in heat (estrus) show behaviour that includes the following which are from observations of captive bobcats:

The female then adopts a coital position (the next stage is copulation). As is the case for cats generally, both domestic and wild, the male then sinks his teeth into the scruff of the female’s neck and mounts the female. Copulation is brief and afterwards  he retreats and washes. After a rest they re-start. This may happen from one to about sixteen times in one day. See Cats Mating.

Thereafter the timetable is as follows:

Mothers can struggle to feed young if the prey base is inadequate (for example small rodents being the only source). Before reaching full adult size bobcats search for their home range. The time spent finding a suitable site varies with population density, territory size and dispersal of resident bobcats.

Sometimes bobcats can travel long distances to find a home range – 182 km being  a recorded maximum for a male, while normally it is in the order of 20 – 40 km. Males travel further than females.