Described as “the greyhound of the cat world”1, it is not difficult to see why. The appearance is sleek and athletic. The cat is described as “extrovert and curvaceous”2.

This cat is one of the Rex cat breeds. Five more are featured on this website. The others are the Devon Rex, the Selkirk Rex, the LaPerm, the Tennessee Rex and the German Rex (new window). They all have the curly coat. The term, “rex”, comes from a king who kept rabbits and he exhibited them. One had a curly coat. The association between a curly coat and a king stuck. Rex is the Latin word for king.

The Cornish Rex cat is not very rare (see rare cat breeds) but rarer of course that the very popular purebred cats such as the Siamese and Maine Coon cats.

In terms of weight this cat is on the light side of average, which is not surprising when we look at the photos on this page (see a comparison on cat breed weights). This cat is rangy and slender (see below). It has an “oriental” cat body shape, the slenderest of the cat conformations.

The cats featured here are the American Cornish Rex cat, which are different in looks to the British Cornish Rex. They have longer legs, are more “delicate” and are vocal like the Oriental Shorthair.

As the name suggests, this breed originates, in Cornwall 1950. Cornwall is a county in the south-west of England. It is known for its beautiful countryside and retired English couples.

On a Cornish farm, a litter of cats born to a cat named “Serena” (a tortie and white shorthair – calico), was discovered in which a genetic mutation had resulted in one of the male kittens being born with an extremely unusual, fine and curly coat. He was named “Kallibunker” (see photo below). Not only was his fur different his, head and body was long, apparently.

He is the founding Cornish Rex cat from which others have been bred. Two offspring of Kallibunker (bred incidentally by mating with his mother) were produced, both with the trademark curly coat. The male of these two cats produced a fine female, which was exported to the USA, where she was crossed with a Siamese (I am presuming a Modern Siamese) giving the breed the long tails and large ears. 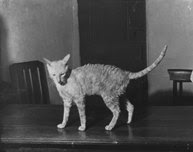 Above: ‘Serena’ a tortoiseshell and white cat cat living with Nina Ennismore, gave birth to a litter, one of which was a cream colored boy cat with curly hair (she named this cat, “Kallibunker” – see adjacent photo). The CFA author claims that this little kitten was different in other ways with a fine boned body, long legs and big ears. The photo does not support this. This cat is a random bred cat that is somewhat slender.

The mother cat was, according to the CFA, a classic British mixed breed cat. These cats are quite stocky or cobby (to use a cat fancy word). It is my opinion that the body conformation (body shape) that you see on this page has been manufactured (bred by careful selective breeding with the Modern Siamese cat in the USA). The rex hair, though, is due to the genetic mutation.

Mrs Ennismore apparently wanted to have Kallibunker neutered (to be a pet) but her vet convinced her to breed from him by initially mating with his mother (inbreeding to enhance the “type”, the appearance). Two of the three in the litter had curly coats.

Genetic mutation producing the curly coat tested and found to be recessive.

Life magazine (a very popular magazine at the time) published an article about Kallibunker. Mrs Ennismore had Kallibunker destroyed because he apparently constantly fought with another male (sounds bad – what do you think?)

2 Cornish Rex cats imported into USA. Two of the kittens from the litter of one of these 2 cats became the foundation cats for the Cornish rex cat in the USA.

1961? – The American Cornish rex line started independently of the UK.

See quite a lot more on the history of this cat breed plus some interesting pictures.

Of course, Helmi’s fine photographs say it all. This breed looks similar to the Devon Rex except for the more leggy and “rangy” look. The breed has been likened to a greyhound dog or whippet. There is also one other hidden difference.

Normally, a cat has a three layer coat (outer “guard hair” layer, middle “awn hair” and lower “down hair“). The Devon Rex is missing the guard hairs. The Cornish is missing both the guard and awn hairs leaving the very soft and silky down hair for a coat. This means coat shedding is much reduced and that the cat feels the cold. The fur is the finest and softest of all breeds apparently. As for the Devon Rex the Cornish also likes to find warm spots to curl up in. That might mean you.

There are other cats with a similar rangy, skinny and vulnerable looking appearance. These are the Oriental and Modern Siamese, for example. On 17th November 2007 I went to the GCCF Supreme Show. Although I didn’t see any Cornish Rex cats I did see the Modern Siamese, Sphynx and the Oriental. All have (for me) this over bred highly fragile look.

The ears are very large and set high on the small head. The eyes are medium sized and an eye’s width apart. The wavy coat and its texture are greatly emphasised in the cat shows in some countries leaving a wide interpretation of body conformation. The wavy coat can be affected by a female being in season and the time of the year generally. It is thought the the coat is affected by hormones.

British Cornish Rex cats are “less delicate in appearance”2 than the American cats of the same breed. The American cats have a torso that is “tucked up”. The back is arched. Some people say the rex cats are hypoallergenic.This is incorrect.

The appearance of the cat in Helmi’s photograph does not appeal to me, I must say – too fragile and not normal enough looking for my liking. Although I am a little old fashioned. I was amazed at how small the heads were of the Modern Siamese and this cat, which seems to have the same or similar conformation.

On more technical note, the Cornish Rex is recognised in all colours of all divisions by the cat associations. The colours look like they ripple due to the coat.

All the characteristics of the domestic cat are of course present including notably mischievousness and inquisitiveness and curiosity (cats of this breed has an extremely curious nature). Its rangy body conformation results in a long stride and athletic jumping.

This is a reasonably intelligent cat breed that is friendly towards people (all cats should be to a certain extent and if not it is because they have learned otherwise). As they are active they fully participate in family life. The breed is a suitable pet for children apparently (I do not live with a Cornish Rex Cat). As for the Devon Rex the breed has some dog like characteristics such as playing fetch (probably due to intelligence).

They are said to “charming and talkative”1, playful, attention loving and extremely active.

Crosses between the Cornish Rex and Devon Rex are not allowed as it would be detrimental from a genetics point of view. Apparently mating between them does not result wavy hair. As for the Devon Rex, this breed is not hypoallergenic but he/she is low shedding because of a short coat (1cm) and because it is fine and light. The fur should make this cat more suitable for people with an allergy. The “Rex” part of the name has an interesting origin. We know that “Rex” means king. In the cat fancy it means curly or unusual fur. The King of Belgium (1875-1934) entered curly haired rabbits in a show. They should have been rejected but the standard was adjusted by creating a special “Rex” type in order to not offend royalty.

Photo above: Cornish Rex Cats – kitten – he is called Dax Photo by Kattenpraat

This is practical information from cat loving people:

BEHAVIOR Busy, vocal, interactive and affectionate. Curiosity means they don’t shy away from visitors. As mentioned above they like cuddling up to humans. That works both ways remember on a cold night 🙂

MAINTENANCE Low due to their coat.

HEALTH May be some problems with diet difficulties (some seem to throw up after eating) and skin problems. The Rexes can suffer a defect of the hair follicles, which leads to complete hair loss at 6 months of age (Hypotrichosis)

Go to Cornish Rex cat rescue for some options – there aren’t that many but the linked page presents them.

The Cornish Rex cat is also registered with the AACE, ACFA, ACF and CCA. This is the current (at 2012 breed standard): http://www.cfa.org/Portals/0/documents/breeds/standards/cornish.pdf