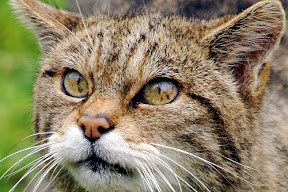 Scottish wild cat sightings are shown below. The map can be dragged into position in the usual way or zoomed in or out. The sightings marked by a blue flag are current (2009) and the source is the Scottish Wild Cat Association website (link opens in a new window). With this map you can amend it yourself in real time, anytime. So if you have seen a Scottish wild cat, a Scottish wild cat hybrid or a cat that you think is a wild cat please go the original Google map (new window) click on “Edit” and then click & drag a blue flag to the location where the sighting took place. When the flag is dropped in place it lets you enter text, an image or a video.

The kind of Scottish wild cat sightings that I would expect to be recorded would be like the one in the video below. I am not sure where the video was taken other than a back garden in Scotland! I have asked the person and am yet to receive a response (Aug 2009). However, it is a good sighting, I think. The video maker asks if it is a Scottish wild cat. It certainly looks like a wild cat and not a domestic cat judging by the overall appearance and particularly the face. To me, this cat has a wild look in the face and is more robust looking that a domestic cat.

It seems the best way is to be armed with (a) knowledge of their appearance (b) where they are likely to be and (c) their habits. The Scottish wild cat falls within the group called “Wildcat”. There is the European wildcat and African-Asian wildcat. The domestic cat is a domesticated wildcat and still wild at heart. The Scottish wild cat is considered by the Scottish Wildcat Association to be a subspecies of the wildcat and it looks quite like a domestic cat but is far from one in character. Incidentally,it seems that the IUCN Red List of Threatened Species™ does not list this wildcat as a subspecies.

This cat has a thick coat, broad head and a flat face. The wildcat has a wild look in the face and is more robust than the domestic cat. Although the European wild cat has a similar but slightly heavier weight to both the domestic and African wildcat at about 3 – 6 kilogrammes (6.6 – 13 lbs), the Scottish wildcat is considered the largest of the wild cat family. Apparently, a near maximum weight would be about 8 kilogrammes (17.6 lbs). This is similar to the big domestic cats such as the Maine Coon which can occasionally reach this weight. 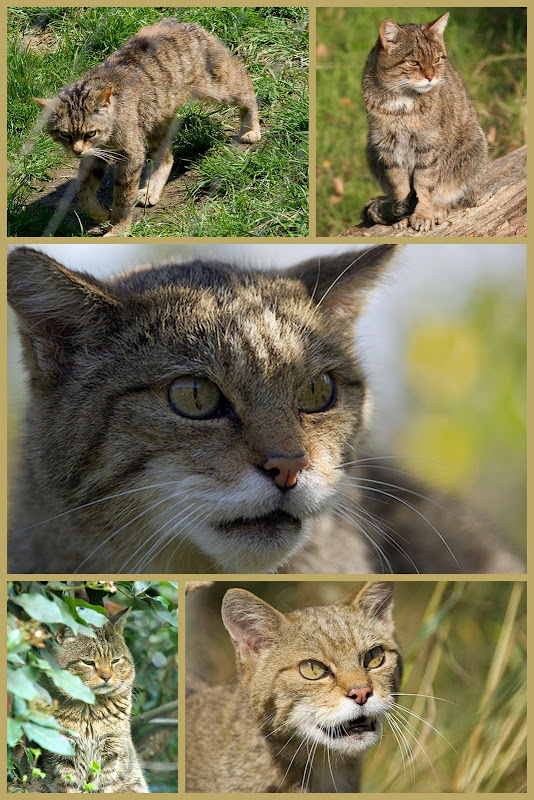 Studying the pictures above, this cat really does look like a wild version of a domestic tabby cat. One notable difference is the coat. Most domestic cats have coats that are less functional. The coat of the Scottish wildcat is the perfect tabby, a grey-brown colour with dark stripes on the head, neck, limbs and the back. The undersides are lighter (described as “light grey” in Wild Cats Of The World) and the area around the mouth is white to varying degrees in these photographs. The Scottish Wildcat Association says that this cat has “no white patches”, although an illustration of one of the cats on the site has white below the mouth. I have decided therefore that the pictures of the cat on this page are reasonably good examples of the Scottish wildcat. They are of captive animals.

The adult cat tail is thick and has dark rings with a black tip. In Scotland the wild cat can be black. This is described as a hybrid (I presume first generation) of the Scottish wild cat and a domestic cat and is called the Kellas cat after the village of Kellas in Moray, where it was first found. The recent “big cat” sighting (an odd claim) may have been a Kellas cat.

In theory, Scottish wild cat sightings should not occur in southern Scotland as they disappeared from England, Wales and Southern Scotland by the mid-nineteenth century.

In a survey conducted from 1983-87 by the Nature Conservancy Council for Scotland, wild cats were found in forested areas, bogs, woodland, open heather moorland and the land between moorlands and mountains.

The Scottish wild cat hunts mostly on the ground by moving slowly within its range looking and listening for prey, which typically includes:

It would also seem that some find food in the urban jungle judging by the video! The wild cat is a fearless and resourceful hunter having survived for thousands of years. Only persecution by humankind has forced it back to the refuge of mid and north Scotland.

This is definitely work in progress. It is not uncommon for the range (distribution) of wild cats in general to be not much better than very careful assessments. There are an estimated 400 Scottish wildcats but the experts are not completely sure where they are exactly except that they are above the Glasgow to Edinburgh industrial belt. Despite that there are a few possible Scottish wild cat sightings below that line.

A recent survey has been completed but I am yet to see it. If any visitor would prefer to write about Scottish wild cat sightings instead of using Google Maps, please share your experience by using the form below. What you write will be published on this site and be of use to the conservation of the fantastic and resourceful cat, an asset to Scotland and the world:
Form