Granted there are occasions when the practical difficulties can be minimized and managed but in general it is not sensible for all but the committed few to have a wildcat in the house and which is treated as a domestic cat. And if we are to have wild cats as a pets they should be allowed in the house. A wildcat in an enclosure attached to a residential home is not a pet wildcat in my opinion. 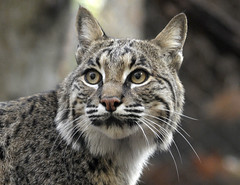 I have been in an enclosure with three different servals, two females and one male. The first feeling or emotion one has is of slight anxiety at the least. If you are a slightly nervous type you would be very anxious being in an enclosure with a serval, if you went in the enclosure in the first place. That is not to say that I didn't get on fine and enjoyed the experience but any form of anxiety is not good and it probably cuts both ways - the cat is probably nervous about a unfamiliar human presence.

Clearly if the serval is raised by us and fully socialized then things might work out but they are large animals (the size of a large dog), and they move very fast. Think domestic cat magnified by 10 in terms of activity, speed etc.

OK there is the simple physical presence of a large active wild animal in the house. Is that practical? What about making the house cat proof? What about the spraying or the worry of the spraying? What about the worry generally? What about those claws? A lot of servals are declawed because the owner wants a wildcat but not the claws! Wrong, wrong, and wrong again. Are you able to cope with the possibility of being drenched in cat urine at regular intervals or having your possessions chewed and scratched (if the cat has had the pleasure of retaining its claws)?

The lynx is smaller than the serval but large by domestic cat standards (up to 35 lbs and more). Lynxs "have been known to be temperamental". Most "are not suitable as house cats"1. But some report that they are "sweet". They need to be hand raised and neutered. Unless hand raised and fully socialized it is highly unlikely that a lynx or any wild cat will make a pet cat.

Bobcats are smaller than lynxs but "may not make good pets when they are adults"1. Are you prepared to take that risk?

The Asian leopard cat, the wild parent of the F1 Bengal cat is known to be highly independent and almost impossible to domesticate. They are nocturnal with large eyes and "do not like to be touched by humans". They are a similar size to the domestic cat with fabulous markings (as have a number of small wildcats) but are a completely different animal.

I know one person who adopted a Asian leopard cat. She admits to the huge problems. I won't discuss this further because she forgot one important thing - the legal issues. I won't name her but I think it fair to say that she is a needy person.

If despite all the practical issues you are still keen to adopt a wildcat because they look so damn gorgeous (and they do), you have to fully investigate all the legal angles. In the UK you need a license from the local authority. In some US states you also need a license and even higher fillial wildcat hybrids are banned in states such as New York and Massachusetts to name just two - there are more states with similar laws and the situation is confused. Please don't do anything until the legal stuff is ticked off and checked thoroughly first. This page on the serval gives some pointers.

There is a trend in the USA to tighten up regulations governing the keeping of wild animals and hybrid wild animals. This is probably because it has been too lax, which has fostered problems such as illegal importations of wildcats. This, in fact, is another reason why it is not a good idea to keep a wildcat as a pet. Also it is distinctly possible that wildcats bred in captivity for the pet market will be inbred. It is difficult to maintain wide gene pool in captive animals for obvious reasons.

The underlying problem is probably this. People are people; they love the look of the wildcats; they are often stunning. The ocelot is another stunning looking cat that is also "domesticated". It is the appearance that attracts people to "own" one. Insufficient research by the prospective buyer is carried out. The whole thing turns into a nightmare and the cat is relinquished or it escapes (perhaps conveniently, sometimes). Both the person and the cat suffer.

Adopting a cat simply for appearance is not a good idea. A cat should be adopted for long term companionship and true well socialized domestic cats make excellent companions and there are millions of them waiting for a nice home - your home! Go on.. adopt a shelter cat instead, you know it makes sense..and then lets allow the wildcats some space of their own in the wild, on this crowded planet.

1. legacy of the cat by Gloria Stephens

From Wildcats as Pets to Wild Cat Species