A search for cat paw prints can mean one of two things: a search for clip art of paw prints and/or a cat’s tracks left in sand, earth or snow and sometimes rock! Consequently, I cover both topics on this page.

Mystery cat picture? A grey-skined Sphynx (hairless cat) lying between some bedding with their fron paws sticking out.

Below I present a piece a clip art that I have purchased from iStockphoto. It links to a large format version so bits of it can be cropped out and used separately. These bits can be used for personal use but the clipart cannot be resold. You would be wise to refer to iStockphoto’s terms and conditions. One such permitted use under the terms is as follows: “on–line or electronic publications, including web pages to a maximum of 800 x 600 pixels for image or illustration Content or to a maximum of 640×480 for video Content..” That should suit lots of people. 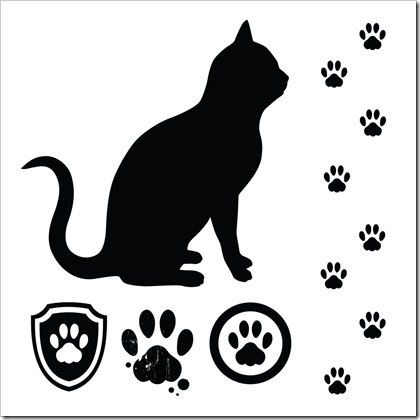 The above cat paw prints clipart is a large thumbnail. Click on it to see a 1000 x 1000 pixel version. But please comply with the terms of use as mentioned. 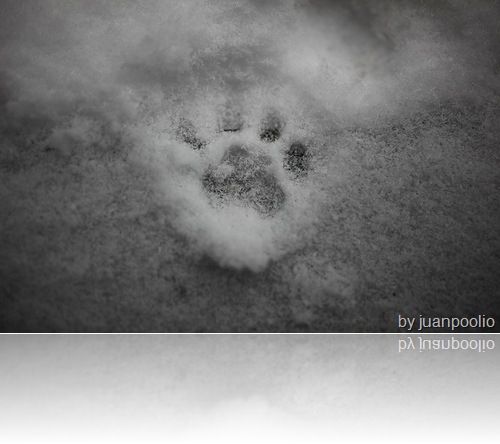 I call this one: cat paw prints in snow on its way to a murdering. pic.twitter.com/wT2qenBBCU

Poor Frankie, she’s fallen out with Mummy & Daddy after being given her flea drops 😾Here are her sweating paw 🐾 prints as she ran away 😿 But at least she’s warned us what’s coming & we know to hide. Thanks Frankie, from Tia & Molly 😺😺 pic.twitter.com/hnJzEfXqYD

Note: This is an embedded tweet. Sometimes they are deleted at source which stops them working on this site. If that has happened, I apologise but I have no control over it. The same goes for the tweet below 😊.

Below are a series of interesting images of paw prints or marks on various surfaces. One of the best surfaces is snow for obvious reasons. These images are all published here under a specific creative commons license. If used they must be used as is (unmodified), you must give the original author credit and you may not use them for commercial purposes.

THERE ARE ARTICLES ON CAT PAWS AT THE BASE OF THE PAGE.

Some info about the domestic cat’s paws!

Cat paw prints are fascinating. The cat’s paw is too. Please don’t harm them through declawing. A cat’s paw contains scent glands for marking territory. Territory is also marked by scraping the ground with their claws. The cat’s paw is an intriguing part of feline anatomy. Desmond Morris refers to Oscar Wilde who spoke of the “Velvet Paw”. He was conjuring up an image, according to Desmond Morris, of the gentle softness of a cat’s foot when the claws was sheathed.

A cat can have their claws out at which point they are a deadly weapon and a tool with which to climb and to scent mark and scrape. When the claws are in, the feline paw feels soft and smooth. Morris says that the paw has a double life. Interestingly, the default position for claws is for them to be in. It takes an effort to protract them. Therefore, it is perhaps incorrect to say that the claws are retractable. It is more accurate to say that they are protrusible. It’s a technical point but a point that Dr. Desmond Morris made.

On each front paw there are seven small pads, separated by tufts of fur. Of these seven there are seven digital pads, one per claw. One of them is the pad for the rudimentary thumb. This carries the dew claw. The others lie beneath the four sharp protrusible claws. In the centre of the underside is the largest of the seven pads which is called the plantar pad. It has three lobes and it is the main support-point for the animal’s leg. It protects the weight-bearing leg bones.

There is a small wrist-pad called the pisiform pad. ‘Pisiform’ means “pea-shaped” and refers to the shape of the wrist-bone beneath the pad.

There are five pads under each of the hind feet. There are four main digital pads and one large, central plantar pad. The hind feet take more pressure when moving and when jumping.

There will be a difference in the texture and feel of paw pads depending upon whether the cat is an indoor/outdoor cat, an outdoor cat or a full-time indoor cat. Roaming cats will have tough and leathery paw pads while in indoor cats they will be smooth and spongy.

Sometimes paw pads have a benign genetic abnormality called polydactylism in which extra toes are present. Apparently, Boston, Massachusetts is the centre for the spread of domestic cats with extra toes in North America. In the city they examined 311 cats and 39 of them had extra toes.

Tests have revealed that out of approximately 100 cats, 40 were left-pawed, 20 were right-pawed, and 40 were ambidextrous. This is in complete contrast to people were only 10% of individuals are left-handed.

Read an article about scent glands some of which are in those gorgeous paws 😊.

Where are cats’ scent glands located?

Why do cats dislike their paws being touched?

Cats have a refined sense of touch. Their paw pads are extremely sensitive. They are packed with receptors which provide ...
Read More

They say that cats leave paw prints on our hearts. Here are some pictures of cat paw prints. You will ...
Read More