The “leopard cat” as it is more commonly called is one of the most commonly found wild cat species. It is an Asian wild cat that lives across a wide range of Southeast Asia. It lives habitat from scrublands to semi-deserts. Its range extends from the far east of Russian and North Korea in the north to Java in the south. It weighs about 6 to 8 pounds (2.7-3.6 kgs) and feeds on small mammals, reptiles, insects, birds, fish, deer fawns and grass. It is itself prey to the much larger common leopard. The Chinese call this wild cat species the “money cat” because the spots look like coins.

The leopard cat is possibly the best known small wild cat because it is the wild cat half of the domestic cat hybrid, the very popular Bengal cat. This puts this cat in a rare position in respect of peoples’ attitude towards wild cats. This though is not the only wild cat to parent a domestic cat. You can see the other wild cat hybrids on this page: Wild Cat Hybrids.

In general the Asian leopard cat (Prionailurus bengalensis) is not that dissimilar to the domestic Bengal which is to be expected of course and it is certainly what the breeders aim for! However, the Asian leopard cat is somewhat longer in body and leg length. This makes it an excellent and natural climber and very athletic. Length is 25″ to 32″ and weight 5.5 to 22 lbs max. (see below). The head is quite small in comparison to the rest of the body, with large eyes and a longish muzzle it seems to me. 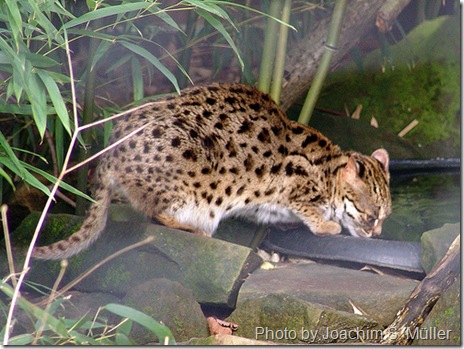 The size of the Asian leopard cat, though, depends on its location:


Cats that live in the north, although larger put on weight before the onset of winter and then lose it over the course of the winter. Leopard cats can overeat and become fat.

The coat texture is soft and coat colour also depends on the location:


The coat markings vary considerably (the same can be said for the domestic Bengal cat). Usually, the ground colour or background colour is tawny and the underside of the cat is white. Essentially the cat is a spotted tabby

cat with very impressive, high contrast, facial markings. These are the kind of markings that cat breeders aim for in the domestic Bengal cat. 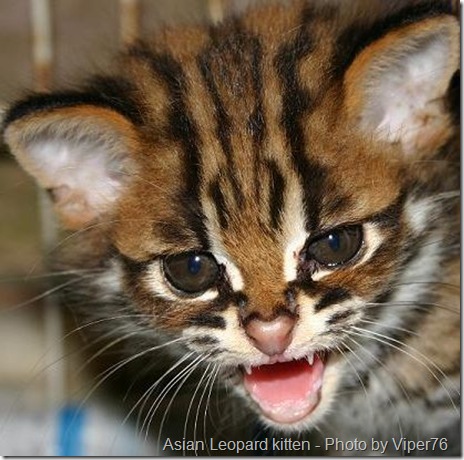 The above photograph published under an Attribution-Non-Commercial-Share Alike 2.0 Generic license. The original has been cropped. Photo by Viper76

The Asian leopard cat likes water and swims well and accordingly has webbed feet. They have a liking for water that has been passed down to the domestic Bengal cat. Many Bengal cat owners speak of their cat jumping into the bath or shower and there are many videos of Bengal cats in water! The book The Wild Cats of the World recites the story of an Asian leopard cat that swam out to a boat in the Bay of Bengal, where it was captured!

This is constantly changing i.e. shrinking. The three sources of information that I have on this come from Wikipedia, IUCN Red List of Threatened Species™ (Red List) and the book, Wild Cats of the World and all differ. The book was published in 2002 so things have changed since then as there is the inevitable habitat loss due to human activity and in the case of the Asian leopard cat widespread loss of life due to “harvesting” (sorry I prefer the less euphemistic term, killing) for pelts (again a euphemism for the animal’s skin and fur). I set out the three sources, the most reliable and up to date will be the Red List map (which I cannot publish here but the one below is based on it). The maps are thumbnails, please click on them. The range is indicated in green.:

The Red List map of the range of this cat species indicates loss of habitat or unsuitable habitat and over hunting along the coastal regions of Southern China and in the centre of India amongst other areas. This cat occupies the following countries:

Update 19-8-09: I have created a new interactive open collaboration map using Google My Maps. The map below is a small embedded version of it. You can see a new page on this cat’s distribution and more info and pics here: Leopard cat range.

What does it look like on the ground in these regions? Take the Indonesian forest: 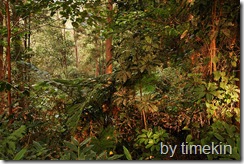 The Asian leopard cat is active day or night. They are skilled climbers and semi-arboreal. They can rest up trees or on ground under cover.

As to prey the Asian leopard cat hunts and feeds on:

It would seem that the Asian leopard cat hunts similar prey and uses similar techniques to the domestic cat. Perhaps this is partly why it was chosen as the wild cat element in the hybrid Bengal cat. It hunts using sight and whiskers inflicting a nape (upper spine near the head) bite to severe the spinal cord. However there is little playing. The Asian leopard cat will immediately consume prey and the whole episode of spotting, hunting, catching, killing and completely devouring a rat for example might take under a minute.

Here is an interesting extract from the 1911 Encyclopaedia Britannica (not subject to copyright, hence the quote) that includes reference to the Asian leopard cat: “The ranges of the Himalaya, from the border of Tibet to the plains, form a zoological region which is one of the richest of the world, particularly in respect to birds, to which the forest-clad mountains offer almost every range of temperature…..Bears are common, and so are a marten, several weasels and otters, and cats of various kinds and sizes, from the little spotted Felis bengalensis [note: this scientific name is incorrect], smaller than a domestic cat…. Clearly stating that the ALC is smaller than the domestic cat. “Dr Nehring came to the conclusion that the domesticated cat has a dual parentage, one from a domesticated Chinese cat (itself derived from a wild Chinese species) on the one hand, and from the Egyptian cat on the other. Two distinct types of so-called tabby cats are recognizable. In the one the pattern consists of narrow vertical stripes, and in the other of longitudinal or obliquely longitudinal stripes, which, on the sides of the body, tend to assume a spiral or sub-circular arrangement characteristic of the blotched tabby. This latter type appears to be the true “tabby”; since that word denotes a pattern like that of watered silk…….it may be suggested that the blotched tabby type represents Dr Nehring’s presumed Chinese element in the cat’s parentage, and that the missing wild stock may be one of the numerous phases of the leopard-cat (F. bengalensis), in some of which an incipient spiral arrangement of the markings may be noticed on the shoulder.” This would suggest interestingly, that the domestic tabby cat has some leopard cat in him already.

The area over which these cats operate (called a home range) is as follows: 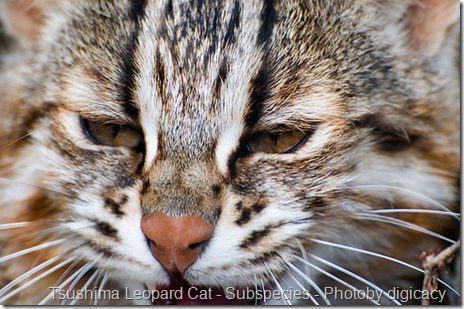 The cat in the picture above is the Tsushima Cat that lives only on the Tsushima Island in the Korea Strait. The population is vulnerable and this sub-species has been reduced to an estimated 70 and 90 cats as at 1997. This cat was first regarded as a separate species, later as a subspecies of the Leopard cat, and now as a variety of the Manchurian subspecies, P. b. euptailurus — see below in red (src: Wikipedia).

The Iriomote Cat (Prionailurus bengalensis ssp. iriomotensis) although once considered a separate species, genetic analysis confirms that it is a subspecies. It lives exclusively on the tiny island of Iriomote.

There would seem to be some uncertainty as to the number of subspecies as the Red List “includes” five.

The Asian leopard cat is classified as Least Concern (LC). Humans have the same classification.

The justification for this classification is:

Hunting for pelts (skin and fur) has been and continues to be widespread. In China “harvests” (I hate that euphemism which means killing for skin and fur) are huge – a lot of pelts go to Japan:

In the video below the leopard cat can hear the water and is it seems instinctively drawn to it.

From Asian leopard cat to IUCN Red List for Cats