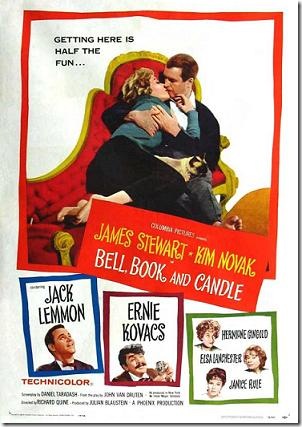 Hands up who has seen Bell Book and Candle. I have but it was about 4 decades ago! Despite that, I still remember a good part of it so it must have made an impact.  That is because it had Kim Novak in it. I sort of fancied her at the time like many others, I am sure.

I am not sure that she was that comfortable being a sex symbol. Perhaps too, this was the beginnings of my love of cats. Which brings me nicely to the reason why I am discussing a 1958 Hollywood movie on Pictures of Cats org.

The now famous cat star in this film was a Siamese cat, Pyewacket. The film was visual interesting and seductive. The glamour of a Siamese cat added to it. The film shows how the world looks through the eyes of cat in ‘camera-distorted images in a deep melancholy blue’3. It was not the most successful of films, however.

The cat in Bell Book and Candle

The film, as mentioned, was made in 1958. This was a time when the cat fancy was less developed. The 1950s and particularly the 1960s were the years when the most cat breeds were created. It was a time of cat fancy activity (see cat history) 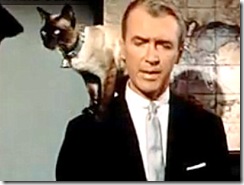 classic Siamese’. Thai cat breeders don’t want their cat to be connected to the Siamese but to be recognised as an entirely new breed. There we have it. Pywacket is a traditional seal point Siamese cat. The archetypical Siamese cat of the time.

Although I do see the beginnings of the modern longer headed Siamese emerging in this cat. The Siamese was a perfect choice for the role as they were at the time considered glamorous and more special than they are today. They were the cat of film stars. They are also amongst the smartest of all the cat breeds and very vocal. They are active. Perfect for film stardom then.

I must confess that although I don’t like the modern Siamese appearance, the slender more exotic look would have been perfect for this film too. Maybe someone will make another version!? ‘Pyewacket’ is a very popular name for Siamese cats, unsurprisingly. It comes from the time of witches’ familiars.

During this time, when there was a belief in witchcraft and before about 1712 in England, witches were tried by the water ordeal to see if they drowned. ‘Pyewacket’ is the real name of one of the familiars of a witch of that time. Here is an extract of a book2 written in 1825 describing the time around 1712 and earlier in England from a legal standpoint: A ‘familiar‘ is an animal companion of a witch. The animal was commonly a black cat. Familiars were persecuted in the middle ages. Black cats have been the subject of abuse ever since and a lot of superstition surrounds black cats to this day.

More on Pyewacket – As mentioned, Pyewacket was one of the familiar spirits of a witch detected by the “witchfinder general” Matthew Hopkins in March 1644 in the town of Manningtree, Essex, England. Hopkins claimed he spied on the witches as they held their meeting close by his house. He heard them mention the name of a local woman. She was arrested and deprived of sleep for 4 nights.

At the end of this ordeal she confessed and called out the names of her familiars, describing the forms in which they should appear. They are referred to in part in the extract above. Only the first of these was in the form of a cat; the next two were dogs, and the others were a black rabbit and a polecat. Accordingly, Pyewacket was, presumably, not a cat’s name. As for the other familiars, Hopkins says only that they were such that “no mortall could invent.” The incident is described in Hopkins’s pamphlet “The Discovery of Witches” (1647)4.

The film Bell Book and Candle

The film is based on the hit John van Druten’s Broadway stage play. The film Bell Book and Candle provided the inspiration, it is said, for he 1960s television series ‘Bewitched’.

Bell Book and Candle — The Plot 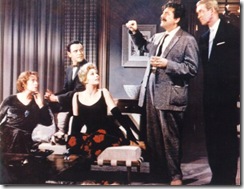 — Gillian’s neighbour is Step Henderson. She has a gallery of primitive art. Gillian is a witch with a ‘familiar’, her Siamese cat. Shep Henderson plans to marry Merle Kittridge. As Gillian admires Step but dislikes Merle (from college days) she casts a love spell over him to make him love her instead.

Gillian’s plan goes awry as she falls in love with Shep, which under the witches code means she loses her supernatural powers. Meanwhile, Gillian’s brother, who is also a witch, has agreed to help an author write his book on witches in New York. The author, Sidney Redlitch, arrives thanks to a bit of witchcraft. Gillian stops Shep’s interest in this by casting a spell.

She confesses her witchcraft to Shep. He is upset. She then tries some more witchcraft on Merle to get rid of her but by then her supernatural powers have disappeared. Shep can’t stop loving her because of the spell on him. He breaks it with the help of Bianca de Passe. He confronts Gillian and parts. Of course in true Hollywood fashion the two get together again, but this time on a proper footing. By the look of Shep’s demeanor when Pyewacket is on his shoulder, he is not interested in cats! He may even be allergic to them but I have forgotten if that was mentioned or indicated in the film (see hypoallergenic cat breeds).

1. This is a copyrighted image (Copyright © 1958 by Columbia Pictures. All Rights Reserved). Fair use is pleaded along the lines as stated by the Wikipedia and Wikimedia authors. This site is non-profit and for charitable purposes.

2. Westminster hall: or, Professional relics and anecdotes of the bar …, Volume 1

4. http://en.wikipedia.org/wiki/Pyewacket_%28familiar_spirit%29 – part of this is verbatim as allowed under the Wikipedia® license.

From Bell Book and Candle to Cat Media Reviews