Khao Manee – Photo believed to be in the public domain

The Khao Manee is a very rare breed of cat that I have only recently stumbled upon. It is a native of Thailand as is the Siamese, Burmese and Korat. Although the Burmese is also native to neighbouring countries. On that note is this cat breed also found in other Asian countries? The picture below is claimed to be a cat of this breed, which was taken in Tamsui, Taiwan. The cat has a collar so it is domesticated, although the cat could do with a bath, more an off-white it seems to me – apologies to the owner. The classic odd-eye colours are stunning. 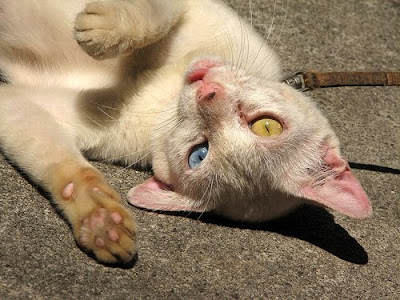 This a pure white cat. The name is translated as “white gem”, which I think is apt as this is a very neat looking gem of a cat. There is a sense of purity about not only the coat but the nice, normal conformation although it is described as being of “foreign” type. This means that it is slender (cat body types). The odd-eyed cat of this breed is considered a good luck cat1.

The word ‘Khao’ is pronounced ‘Kow”1.

There is a club for this breed, the Khao Manee Cat Club. It was founded in 2009 and is the first for this breed. It is based in the UK. They call the Khao Manee, the ‘Royal Khao Manee’. Apparently the numbers are dwindling in Thailand and the work of the club not only involves promoting the bred but preserving it, they say. That means importing cats from Thailand. I also understand that cat(s) have been imported from the USA. There is a breeder there, Vinlands and Odessy who breed Norwegian Forest Cats and the Khao Manee.

I wonder whether it is a breed in the conventional sense in Thailand, by the way. If there are no cat associations in Thailand then it would not be possible to establish a pedigree. Without a pedigree a cat cannot be purebred. Without being purebred a cat cannot be a breed. Perhaps someone can tell me if this cat is a random bred cat in Thailand but a breed (or a breed to be) in the West. All natural cat breeds started life that way and this cat is called a natural cat breed. This is meant to distinguish the cat from created cats or hybrids.

The club is seeking to be affiliated with the Governing Council of the Cat Fancy (GCCF), the premier cat association in the UK.

The cat was exclusively bred by Royalty in Thailand1 at one time and for hundreds of years. In the Thai book of cat poems (1350-1767) it is referred to as the Khao Plort (translated as ‘all white’). The Thai book of cat poems is called the Tamra Maew. The word ‘Maew’ is interesting don’t you think? It is very close to the word ‘meow’, the sound a cat makes.

The history of the Khao Manee runs parallel to that of the other breeds that originate in Thailand. It is also interesting that four breeds originate from Thailand yet in Thailand they are not seen as breeds but a type of cat (I am making that supposition and stand to be corrected).

As at April 2010, this cat breed is new in the West. It is yet to be accepted by the associations. Applications have been made, as I understand it, to TICA for registration only status and GCCF.

At April 2010 there is no formal breed standard (TICA) or standard of points (GCCF)1.

This has not been mentioned by others as far as I can see, but I will suppose that the white coat is caused by the presence of the dominant white gene (W).

As mentioned this cat is foreign type, which means slender. This gives a lithe appearance to a cat. The ears are larger than average but unnaturally so. The coat is short and lies close to the body. This seems to be a single coat, which means there is little or no undercoat1. See cat hair.

The eye colour, which I refer to below, is affected by the same gene that produces the white coat, the dominant W gene as I understand it.

Eyes can be blue, amber, yellow or green and the most prized eye colour is blue one side and one of the other colours on the other side. These are odd-eyed cats. Odd-eyed cats are found amongst all white cats. The white Turkish Angora is another example of a prized type of cat within a breed.

The W gene not only masks (“epistatic”) all other colours but it also affects eye colour and sometimes the inner ear is also affected, causing deafness. If a cat has odd eyes, one blue and one orange/yellow, deafness may occur on the blue eye side. In a survey of 185 cats, 25% had normal hearing and yellow eyes, 31% had normal hearing and blue eyes, 7% were deaf and had yellow eyes and 37% were deaf and had blue eyes2. See Cat Coats White for more on white coats.

Genetic research is being carried out by Professor Leslie Lyons of UC Davis in California on deafness in white cats. The Khao Manee Cat Club is involved with this.

Please note that this section is not intended to criticise this cat breed. I am simply reporting the facts as I know them. If I am wrong please leave a comment. However, deafness must concern the club and possibly places a question mark over the viability of the Khao Manee, I would have thought.

The dominant W gene and piebald S (white spotting) gene produce odd eyed cats. 60-70% of odd-eyed cats that are white can hear3. That leaves quite a high proportion who have hearing problems. In Turkey they say the eyes should be as green as the lake and as blue as the sky5.