I posted the story of Yellow Cat a while back and he continues to be our personal feral cat (see the post here: Yellow Cat). He’s very ‘spooky’ still, but I can at least look at him through the window. If he sees me, he doesn’t run unless I attempt to come closer. He eats right at the back door, where sometimes Bigfoot is on the other side of the glass talking to Yellow Cat. Yellow just ignores him. 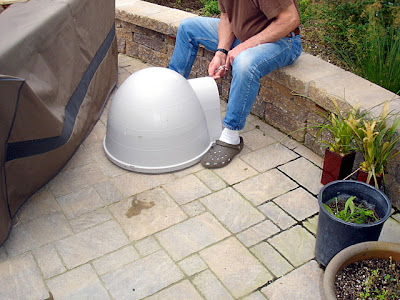 Just before the rains started, I bought him this igloo in hopes he would have the wisdom to use it during what was promised to be a very raining season. Well, he certainly ate in there, but I later put in a small round black bed to the back of the igloo, that would surely show signs he’d slept there with that thick yellow fur of his. He never did sleep there. Though it is a nice dry place to eat. 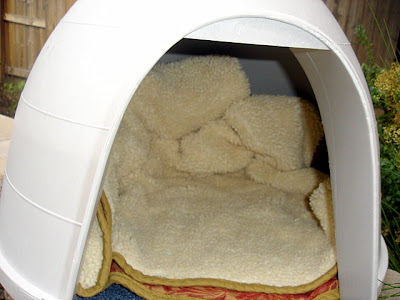 Last week, I didn’t see Yellow Cat for more than three days. I was very worried about him, just like he was my own cat. He didn’t eat, and there was no sign of him. I expected the worst, and was surprised at myself the lump in my tummy with sadness and worry. Lo and behold, he showed up again, very hungry. I had spent weeks trying to get a good photo of him, but it is difficult. It so happens, the house was quiet and the timing was just right – and I was able to get these shots.

You can tell in a couple of the pictures that his right ear was clipped at the end, which means he’s been trapped and neutered. I’m calling him a he now because I saw him do the ‘spraying’ behavior on a bush outside. I’m not sure if he actually sprayed, but he postured as if he did. 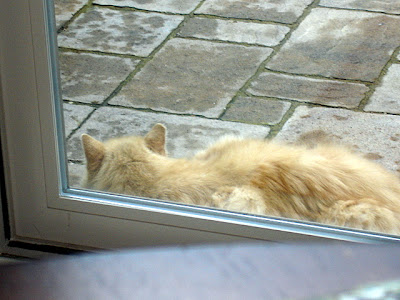 He’s a beautiful cat. He reminds me of Michael’s recent post of an American Bobtail. Now I’m wondering how the summer will go, with all that fur.

I realize he is a free spirit. Locals say he’s very old and has been around a long time. Note his muscles. He flings himself over a 6 foot fence like it is nothing.

I’m very happy he decided our house was a safe haven to mooch food. He’s beautiful to watch out the window. I think he is getting more used to me, as yesterday after eating, he retreated only 12 feet, and gave himself a nice bath. I watched the whole thing out the kitchen window. Voyeur that I am.