A paw or a hand! Polydactyl Maine Coon cat Tootsie. See base of page for link.

A definition of touch might be: To cause or permit a part of the body, especially the hand or fingers, to come in contact with (something) so as to feel.."1. Touch is not confined to touching an object with our hands. And it is not confined to people - of course.

Cats can and do touch in a most sensitive way and they don't only use their paws. A cat's sense of touch includes sensing pressure, warmth, cold and pain. Touch is the first sense that is utilized in the newborn cat as it is the earliest developed sense.

Neonatal (newborn) kittens respond to changes in temperature and seek out warmth and tactile comfort.

Linda P. Case makes an interesting point in her book The Cat, Its Behavior, Nutrition & Health. Humans feel distinctly uncomfortable at temperatures above 112°F (44°C). Cats, however, can tolerate and indeed like very warm temperatures as hot as 126°F (52°C). I should think that all cat lovers and keepers can recognize that characteristic. Sleeping next to a fire or radiator comes to mind, or lying in the sun. When a cat lies in hot sun with a double coat that is black (heat absorbing) it must get mighty hot next to the skin. Cats are more enduring in that sense too. This probably comes from the African wildcat one of the wildcat ancestors of the domestic cat.

Cats use their paws with great dexterity. Some cats have paws that are nearly like the fingers of a human hand. I am thinking of the serval, a wildcat that pounces on small prey and grabs it with finger like paws. On the domestic side, the Sphynx cat has monkey like characteristics and uses its long paws to grab and touch - see the picture below. 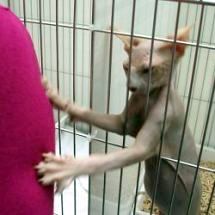 A good number of wildcats grab fish out of streams with their paws. The cat has several "unique adaptations" regarding the sense of touch. The cat's paw has a "large number of mechanoreceptors"2. These are sensory receptors that responds to mechanical pressure or distortion. They are vital in assisting with the manipulation of prey while hunting.

Apparently the highest density of receptors are found "between the foot and toe pads"2. This provides the paw with great sensitivity. In the domestic cat this sensitivity and dexterity is seen in playing with objects and sometimes for example, pawing at drinking water or food. Or even dipping the paw into water and then licking the paw (Cat Drinking Water). My cat, Charlie, often likes to place his left paw on my hand. He does this deliberately and with purpose. It is not a haphazard incidental thing. He must like the touch of my warm skin and the tactile comfort it brings.

We know that cats also touch with their hair! Yes, their magnificent whiskers (vibrissae) which are found on the muzzle, side of face and above the eyes are extremely sensitive. At the base of the whiskers are receptors.

The cat also has sensitive carpal hairs, which are found on the back of the front wrists. Both the vibrissae and carpal hairs are sensitive to air currents and they provide sensory information about the position of the legs and head particularly at dusk and dawn in poor light. Air currents change when going around objects so a lot of information is relayed to the cat.

The whiskers can touch like fingers and are used to locate the exact place on the nape of the neck for the cat to place its teeth when severing the spine of prey3! Shocking but extremely impressive. A cat will use its whiskers this way at night when hunting to aid it in killing prey. The whiskers above the eyes help protect the eyes. When they are stimulated the eyes close (blink).

Cats, like humans, enjoy and need contact comfort too. This is provided by us in the form of stroking and petting and from other cats through mutual grooming. This is called, allogrooming.

Because cats are essential solitary creatures "allogrooming is not well established in cats"2 (generally). Although, cats are adaptable and they do live in groups when needed for survival i.e. food is available. In multiple cat households cats will sometimes allogroom. I am thinking of Martha Kane's Ceeta and Speedy. They love each other and each others company so mutual groom often. You can see these two cats half way down this page: The Rescue and Feral Cats of Martha Kane.

The most obvious example of allogrooming is mother to kitten. This is an important form of communication. It transfers to us as substitute parents to the adult cat, which are kept in a kind of suspended kittenhood by our cat caretaking including stroking a substitute for a lick.

In feral cat colonies mutual grooming will sometimes take place when the cats are resting. But it depends on the individual cat - they are all individuals with their own characters; likes and dislikes.

One last point on the subject of a cat's sense of touch. Bearing in mind the paw's sensitivity and usefulness, don't you think it extremely cruel to rip out the last digit of all the cat's toes on both forelegs for a person's convenience? This is called declawing.

From A Cat's Sense of Touch to Cat Anatomy