The European Wildcat is, like other Wild cat species, under continual pressure from human population growth and activity. The wildcat is the ancestor of the domestic cat and therefore they are arguably the ‘authors of their own demise’ in that they mate with outside, unsterilised domestic cats resulting in the gradual hybridisation of the wildcat which dilutes its genetics.

The Scottish wildcat (Felis silvestris silvestris) is a European wildcat population in Scotland. I have covered description and distribution of the European wildcat. This page deals with habitat and hunting. The European wildcat lives in a wide range of habitats reflecting its wide distribution. In general, it seems that wildcats prefer to live in forests. In Scotland they inhabit “forested areas with scrub, woodlands, bogs, open heather moorlands and marginal habitats between high mountains and moorlands”1. The Scottish Wildcat Association says:

“Scottish wildcats are solitary and largely nocturnal creatures; resting up in hidden thickets, dens or forests by day and patrolling and hunting up to 10km across open ground populated by prey at night.”

Other examples of European wildcat habitat are indicated on the map below:

In the Carpathian Mountains, indicated on the map above, the European wildcat mainly feeds on the yellow-necked mouse, red-backed vole (see photo2) and bank vole. 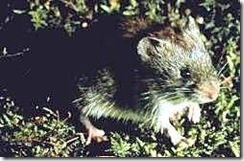 Due to its relatively short legs, the European wildcat is not suited to walking in deep snow and so are restricted to areas where snow is no more than about 10 to 20 centimeters in depth. Wildcats will move to lower territory in winter to avoid heavy snow.

They are not normally found in the “subalpine belt” (pre-mountainous belt), coniferous forests and “spruce taiga”. Spruce is a coniferous evergreen tree looking like a large Christmas tree. A “taiga” is an ecosystem or community of plants and animals.

Wildcats mostly hunt on the ground but are very good climbers in line with all cats. They generally hunt at night. They hunt by watching and waiting or travelling slowly and silently throughout their territory, watching and listening for prey. Once prey has been located, the prey animal is stalked using a low stalking run while using available cover. Once within strike range the European wildcat darts forward and strikes. As is the case with domestic cats, the killer bite is to the nape of the neck (back of the neck), severing the spine of the prey.

Prey is usually a rodent. They also prey on larger animals such as rabbits and hares; even young deer1. In Scotland the wild cat preys on rabbits; in spring this means available young rabbits. Less commonly it preys on shews and birds.

Who preys on the European wildcat? Answer larger carnivores such as the Eurasian lynx.

Sadly, it is probable or possible that the Scottish wildcat is extinct. There may be some hybrids but it appears doubtful that there are any true, purebred Scottish wildcat left in the wild in Scotland. Wildcats have a tendency to mate with unsterilised feral and stray cats which hybridises the wildcat. It is an insidious form of endangerment. Accordingly, there have been discussions about reintroducing the wildcat into the UK. Farmers object but conservationists support the idea. It has merit. I discussed this in earlier articles.