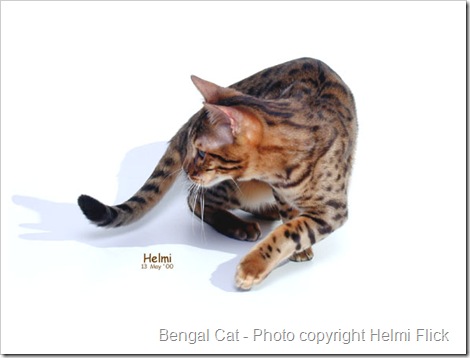 Here are various definitions of this word:

I explore these definitions more in the sections below.

This page on hybrid cats deals with species of cats (wild cats) and breeds of cats (domestic cats). A species of cat is one that has been categorised by people (scientists) for the sake of order, science and study. The process of classification is called taxonomy. To a certain extent it is evolving due to differences of opinion and the rise in genetic analysis (whereas in the past it was based on form and anatomy etc.). There are 36 species of wild cat although this figure is not set in cement (at Jan 2010). All breeds of cat are from the same species of wildcat: the domesticated wild cat. In this instance the term “wild cat” refers to a species of wild cat, which is somewhat confusing. Wild cat can also be spelled “wildcat”.

The scientific name is heterosis. It is recognised that when two different species or breeds are crossed the offspring can be larger and/or stronger. This is perhaps nature’s way of approving the process as it creates a cat with a greater variety of genes, which at a crude level will be a healthier animal, at least potentially. The converse is inbreeding depression. The word “depression” in this context does not describe the mental process of being very sad but a depressed or weakened immune system and a predisposition to ill-health. Increased homozygosity through breeding for appearance can result in ill-health and distorted appearance (see Deformed Cats). Wild cats are also forced to inbreed jeopardising survival. The classic wild cat example is the Siberian tiger. Captive tigers are not uncommonly inbred.

Bambino, Munchkin and Sphynx. The two hairless cats were photographed by Helmi Flick while the Munchkin photo is deemed to be in the public domain.

This refers to the mating of a cat of one breed with a cat of another breed to create a new breed. Sometimes three or more different breeds may be involved (Ocicat). It could be argued that random breed cats (moggies) are the ultimate expression of the domestic cat hybrid. If different cat breeds mate indefinitely you get the moggie.

Cat breeders have naturally sought to create new cat breeds. Hybrid cats is an obvious route. Sometimes this is done by taking two well-known cat breeds and producing a new one. An example would be the Exotic Shorthair (shorthaired Persian). Sometimes the parents of the hybrid are not well known and neither, therefore, is the hybrid offspring (Jaguarundi Curl). There is a list below. There is an almost endless number of possibilities but commonsense (hopefully), limitations imposed by cat associations and health issues restrict the number.

The opposite to human created hybrid cat breeds are the natural breeds such as the Abyssinian and Norwegian Forest Cat although breeders have eroded the natural genetic state of these “natural” breeds. The natural breeds evolved over a long time and were “discovered”.

Here is a long, but not necessarily exhaustive, list of domestic hybrid cat breeds1:

The term “wildcat hybrids” commonly means a domestic cat to wild cat hybrid but on this page this section refers to the creation of a new wild cat type (not species) from the mating of two different wild cat species. This almost always happens for the entertainment of humankind and not naturally (exception: the servical, see below). People like to play God when it comes to hybrid cats. Attempts to create wildcat hybrids have sometimes proved unsuccessful – example: crossing the oncilla and margay – two small wild cats (2).

I have made a list of these some time ago, so I’ll simply refer to it here: Wildcat Hybrids. The best-known example is the Bengal cat. There are many others. The Bengal cat is man (woman) made. Wild cats, though, sometimes mate with domestic cats, naturally. A good example is the Pellas cat, a Scottish Wild cat/domestic cat hybrid. They are black. There are real difficulties working out whether the Scottish Wildcat remains purebred due to centuries of hybridisation (see Is the Scottish Wildcat a Moggie?). See also Scottish Wildcat Sightings. Higher generation wildcat to domestic cat male hybrids are sterile. Hybrid cats in this category are popular and controversial.

From Hybrid Cats to Home Page

See the World’s Biggest Cat for some hybrid cats

P.S. This page has been checked, added-to (slightly) and republished on Jan 30, 2022, about 13 years after it was first published.